When people think about the impacts of global warming, they often imagine polar bears on melting glaciers, or freak weather patterns, such as heatwaves. But what about the impact on countries that already experience some of the hottest temperatures on earth?

The Arabian / Persian Gulf is the world’s hottest sea, and it is becoming hotter due to climate change. Its waters are experiencing increasing temperatures and salinity, rising sea level and decreasing oxygen levels. In Kuwait in 2020, sea temperatures reached a record breaking 37.6 degrees. Home to a wide range of biodiversity including corals, turtles, dugong (sea cows), dolphins and sharks, this warming threatens the region’s biodiversity and coastal communities. Marine biodiversity in the Gulf is particularly vulnerable to climate change as unlike in other parts of the world, there are no species pre-adapted to warmer conditions that can move in from warmer waters as it becomes too hot for the species that traditionally live there.

Negotiations at COP27 will address the importance of reducing greenhouse gas emissions to keep global warming well below 2oC and ideally below 1.5oC. There is an urgent focus on reducing emissions as current commitments would only limit global warming to 2.4-2.6 oC. The negotiations will also cover a global goal on adaptation to help countries build resilience to the inevitable impacts of climate change.

Climate adaptation is important in the Gulf region because even if the world stopped all greenhouse gas emissions today, the sea temperature and sea level will continue to rise. This will cause multiple impacts including losses of coral reefs, declines in fish stocks, and will threaten coastal industries like desalination plants, due to damage caused by sea level rises and increased storms and cyclones.

Despite these risks the impact of climate change on the Gulf and the opportunities for adaptation in the region are relatively under studied. 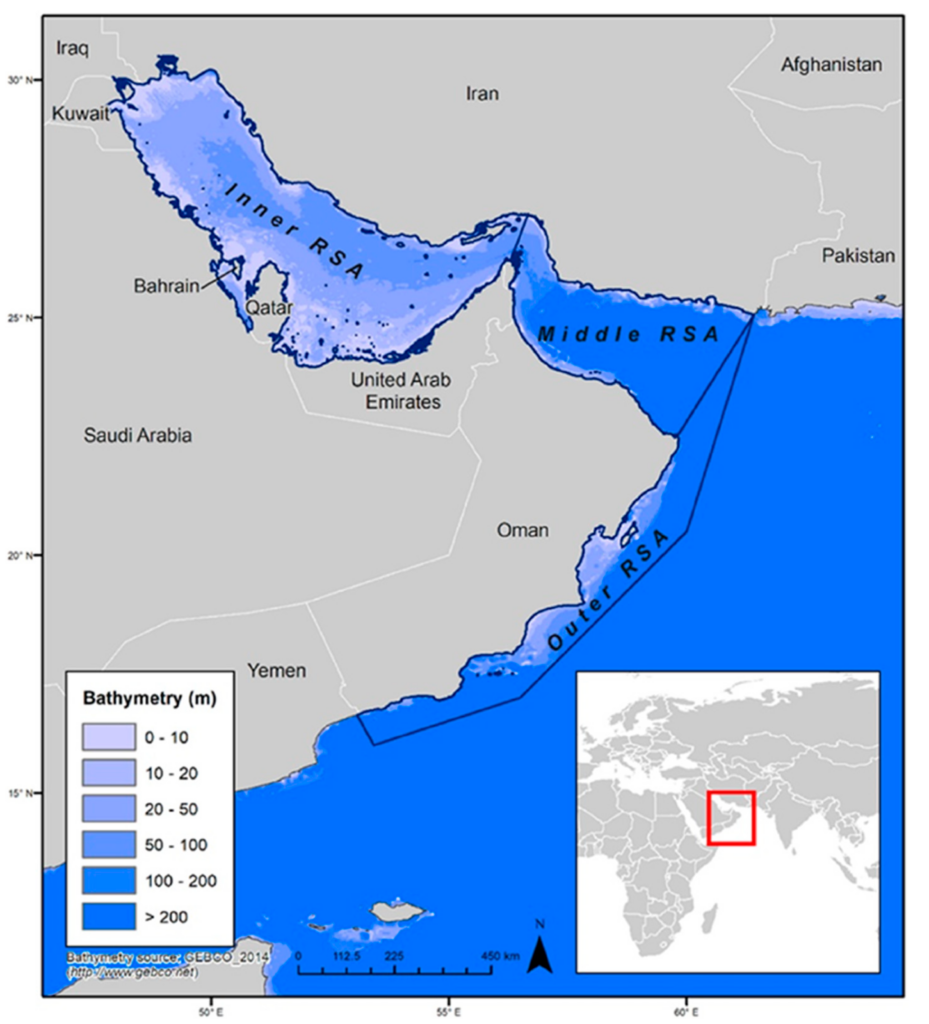 The Regional Action Plan aims to provide the evidence base to support ROPME Member States in protecting their marine environment from climate change. This includes evaluating climate impacts and adaptation actions, and evaluating the potential for blue carbon habitats, such as mangroves and saltmarshes, to reduce the extent of climate change.

The outputs from these studies have been published as a series of Policy Briefs and Technical Report on the ROPME website. A recent evidence review and regional risk assessment identified a number of climate impacts and risks to biodiversity and society in the ROPME Sea Area including:

Adaptation actions in the Gulf

The reports were prepared following a series of multi-sectoral stakeholder workshops with government, industry and academic representatives from across the region to share expertise and develop options for practical solutions to the challenges of climate change.

“A key concept in building climate resilience, including for corals, is to identify and reduce human pressures” said Dr Michelle Devlin, Cefas’ Principal Coral Scientist, and author of the coral adaptation report.

“During the adaptation workshops we worked with regional experts and identified that excess nutrient inputs, coastal development and fishing are key factors that are negatively impacting coral reefs. Controlling these is the first step in building climate resilience before engaging in more active interventions to build healthy ecosystems, such as coral gardening, that can further increase resilience.”

To support action on blue carbon the Action Plan published the first regional inventory of blue carbon habitats for the region. A series of webinars was held to bringing experts together from across the region to share practical experiences in protection and restoration of mangroves, seagrass and salt marsh.

The next stage is to agree a ROPME Climate Change Strategy to continue and foster scientific collaboration on marine climate change amongst the ROPME Member States.

Dr John Pinnegar, Director of the International Marine Climate Change Centre said, “through active collaboration with experts from all eight ROPME Member States we have built a robust regional evidence base that can guide marine climate action in the region. This year’s COP27 has highlighted the urgency of the task ahead and it’s vital that we work together to address the critical challenge of climate change”.