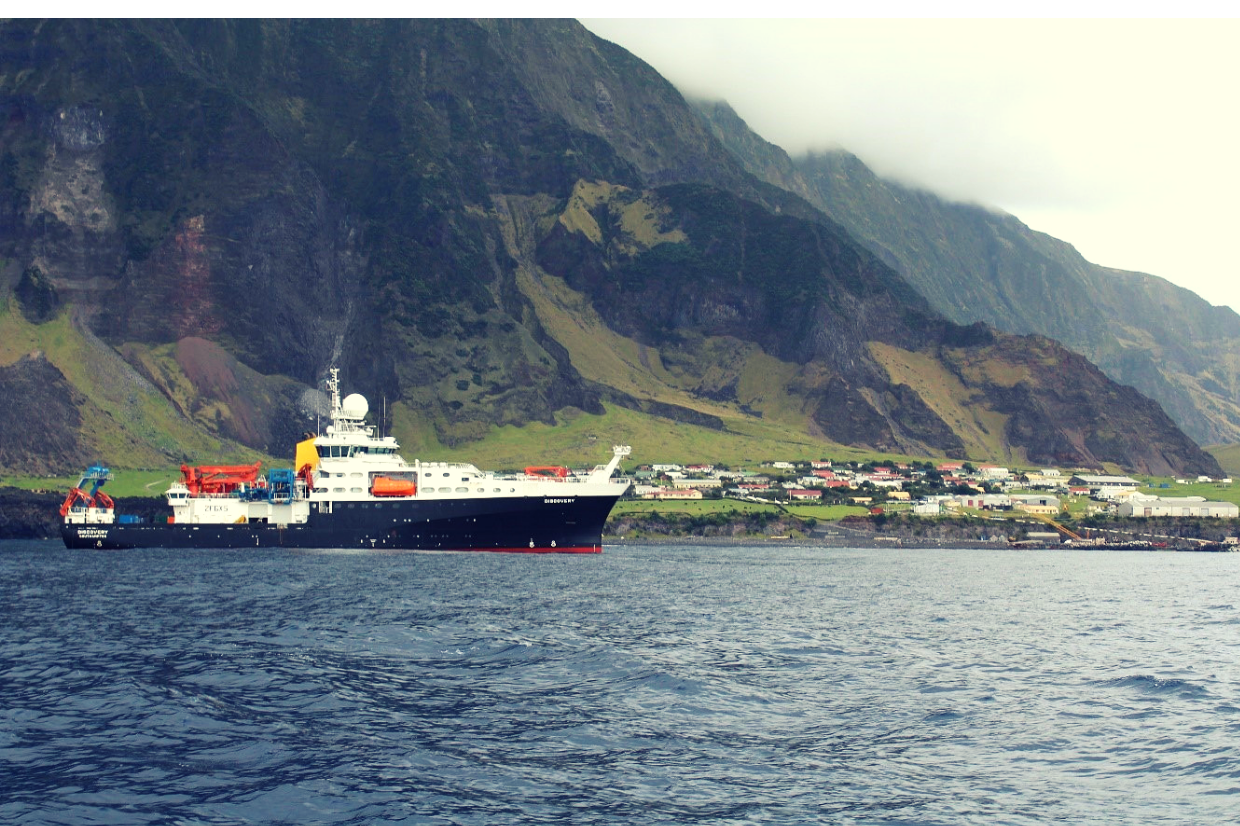 The team spent over a week at sea to reach the isolated island in the South Atlantic Ocean. The expedition focused on studying the seamounts, underwater mountains, in the Tristan da Cunha marine zone where longline and trawl vessels are licenced to fish for bluenose warehou. 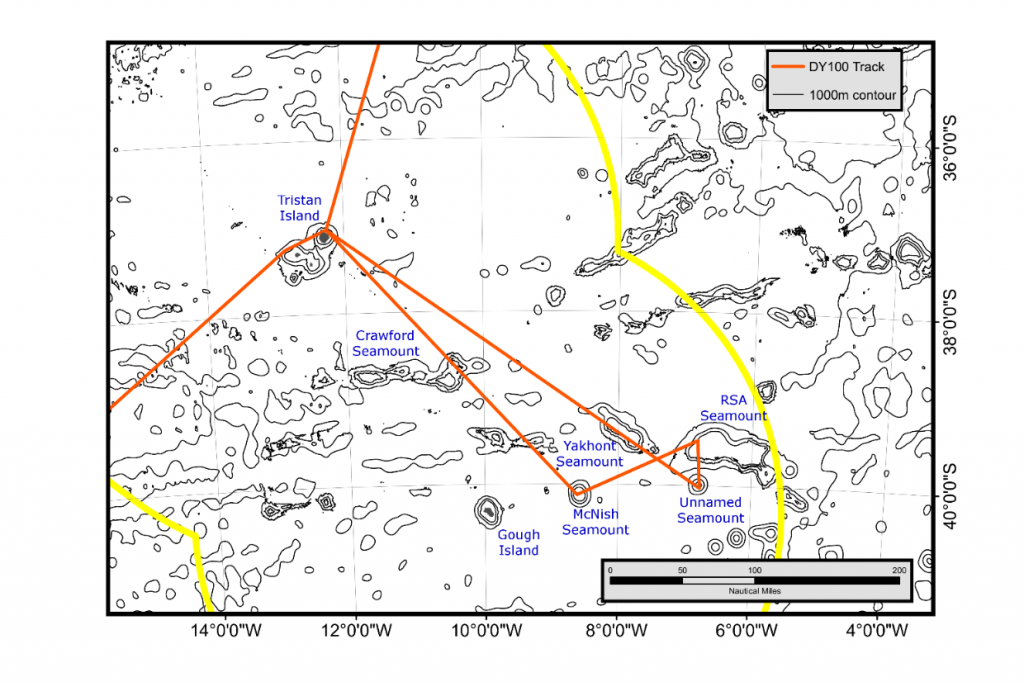 The Cefas team were on board to support the UK Government’s Blue Belt Programme – which aims to enhance the marine protection of over four million square kilometres of marine environment across UK Overseas Territories.

This is the second marine survey to visit the waters of Tristan da Cunha in recent years, following on from the joint Cefas BAS expedition to the island aboard the RRS James Clark Ross in March 2018. 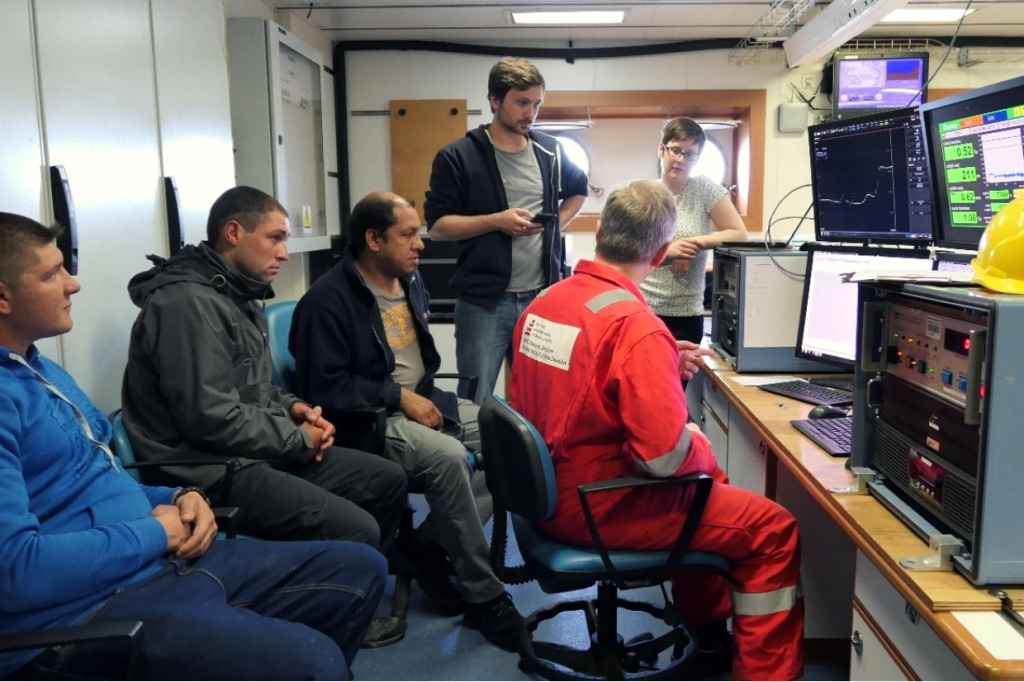 Left to right: Justin, Julian and Warren getting training in oceanographic measurements from the team.

The crew were also joined by a local team from Tristan da Cunha. Warren Glass and Justin Green from the fisheries department and Julian Repetto from the conservation department worked closely with the scientific team during the survey. 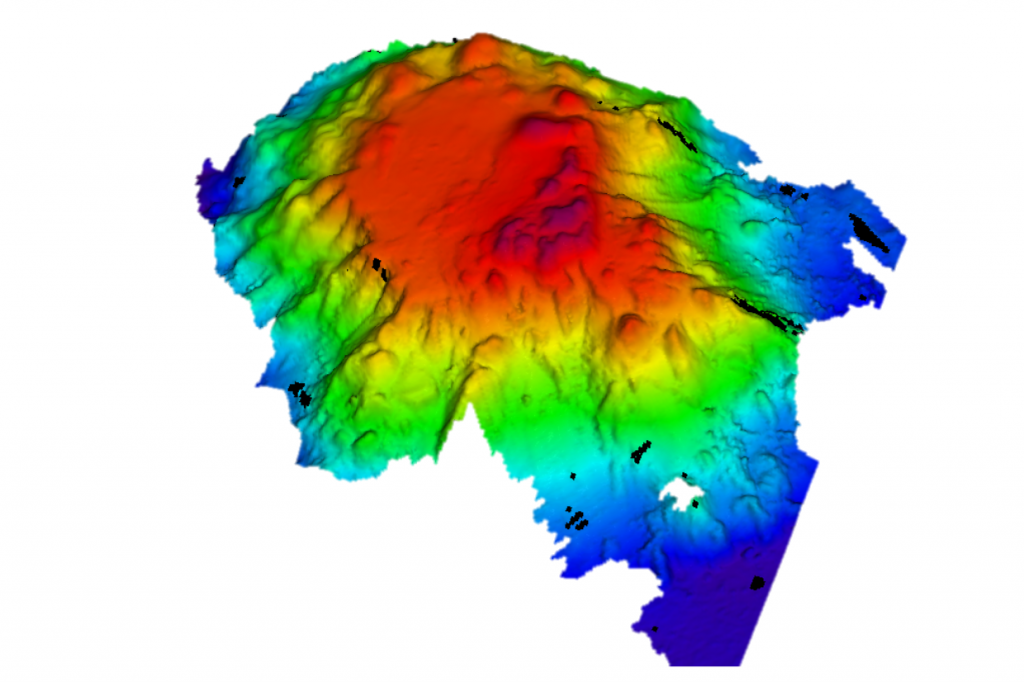 Example of 3D swath bathymetric chart of the unnamed seamount, mapped for the first time during Discovery Expedition 100. The team hopes to support Tristan Islanders in formally naming this seamount later in the year.

The RRS Discovery visited McNish seamount, followed by RSA seamount and before arriving at an, as yet, unnamed seamount. Prior to the RRS Discovery survey, known as Discovery Expedition 100, these areas had never been mapped - much less studied in any real detail.

The scientists first task was to run swath bathymetric surveys to get an idea of where they could make targeted deployments of the seafloor camera system. 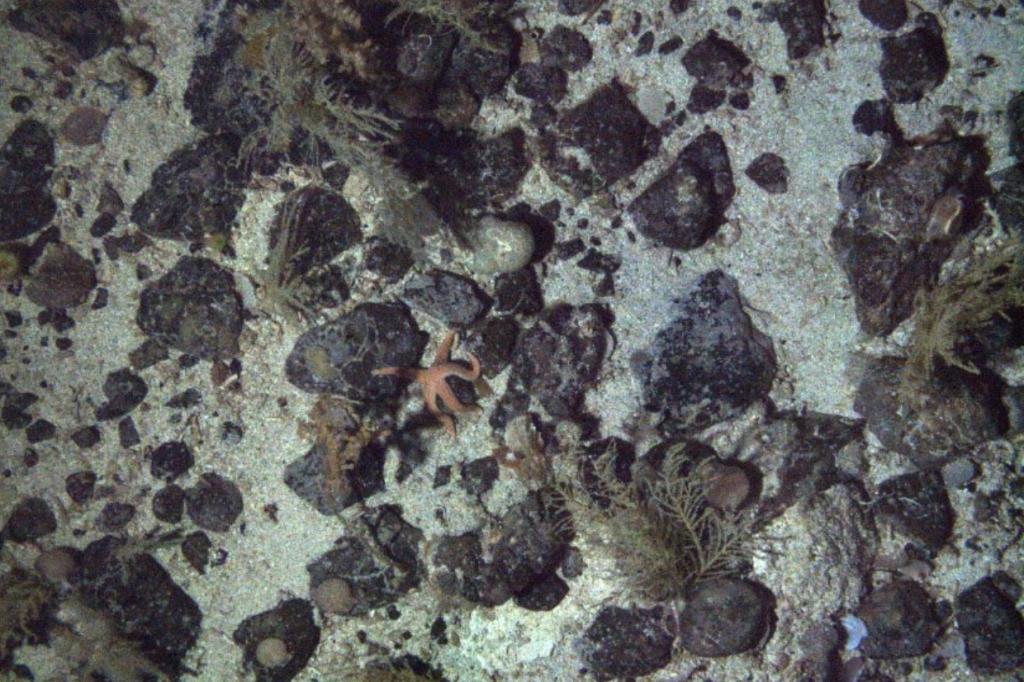 Cefas’ James Bell explains “seafloor camera and sampling work lets us study the different animal groups living on each seamount. It also helps us understand how the animals might have been influenced by historic fishing on these seamounts. We observed loads of different fishes, corals, and other invertebrate species in the water in depths down to 700m”. 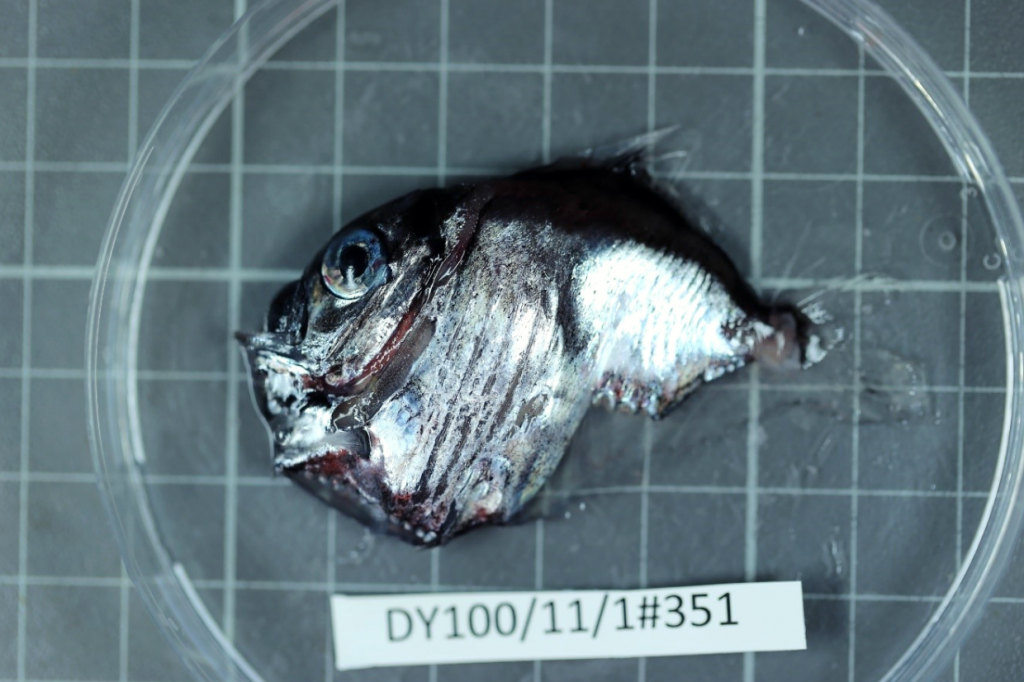 Overnight, the mid-water team were very busy, collecting acoustic data and specimens from depths down to 1000m. This data can then be used to compare the composition and biomass of the species between different areas and link to data and samples from the Tristan da Cunha fisheries to better understand the food webs that underpin commercial fish species.

Scientists and crew also spent time visiting the island itself. During this visit, some of the team gave a presentation to the islanders on the work. 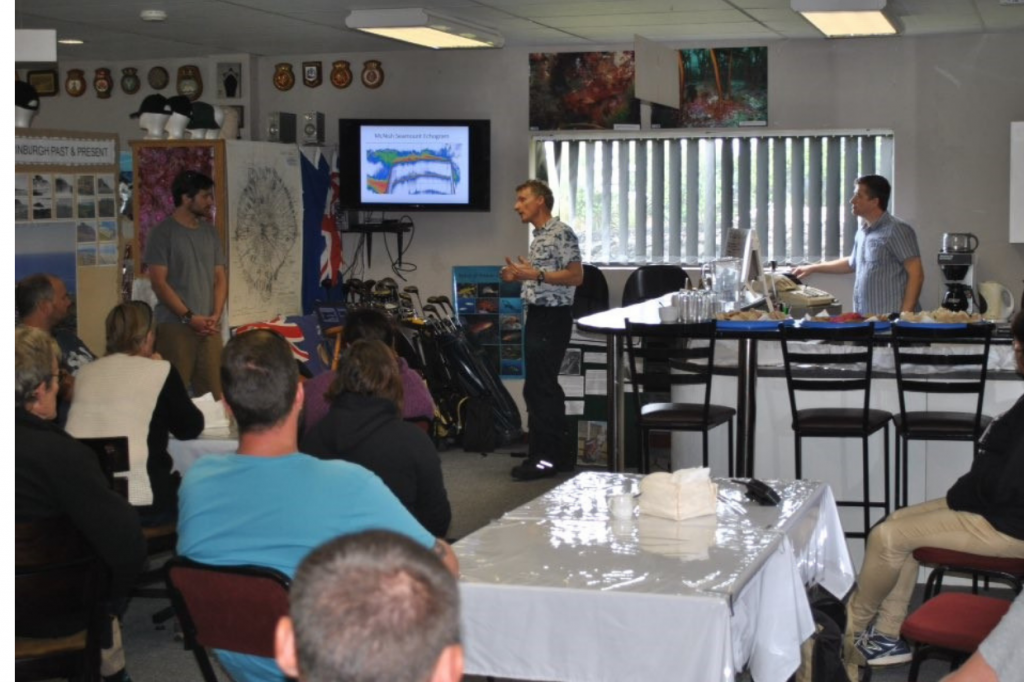 Martin (Cefas), Simon (BAS), and James (Cefas) sharing some of the key initial findings in the Tristan tourism centre.

The team also found time to communicate their findings to an audience over 5,000 miles away in the Natural History Museum, London.  During the “Nature Live” public outreach event members of the audience were treated to a live link up to the vessel. 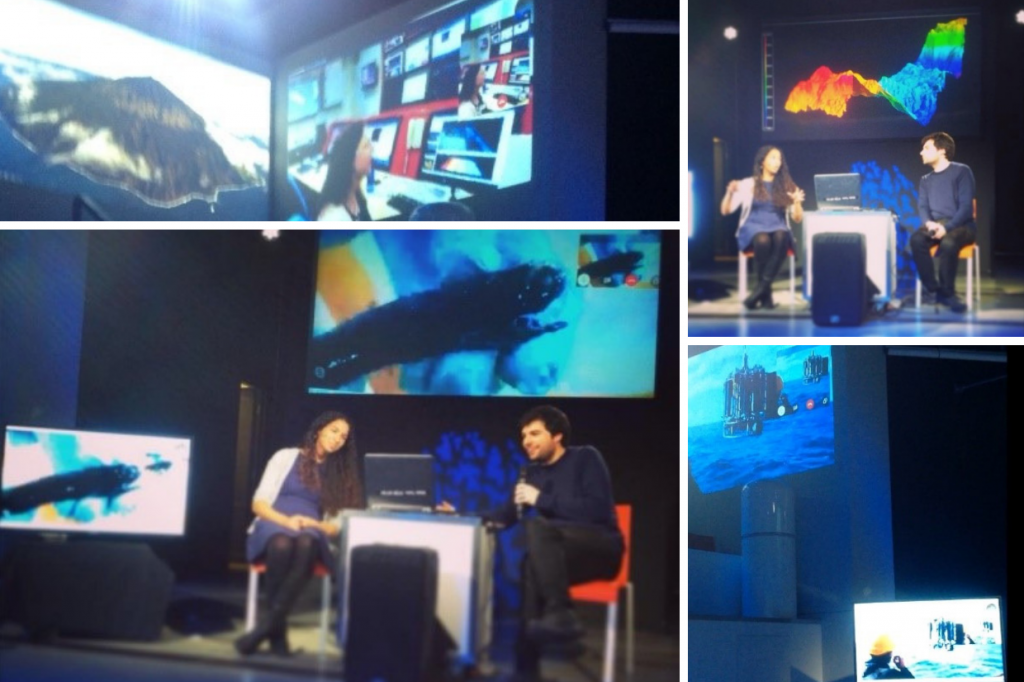 Photos from the Natural History Museum Nature Live event in London. The event streamed live to the team on the expedition.

After visiting Tristan da Cunha, the vessel travelled St Helena to continue the research survey. Following the survey, the team will be analysing and collating the different sources of data and information to help guide and inform Tristan council’s imminent decisions regarding its future marine protection strategy.

Go to the gov.uk website for more information on the Blue Belt Programme.

Visit #DY100 on twitter for updates on Discovery Expedition 100.