A recent Newton Fund Researcher Links workshop on aquatic animal disease gave a group of 50 early career scientists from the UK and Thailand a chance to meet and discuss the biggest issues facing expansion of the global aquaculture industry: disease. The outcome was a focus on developing solutions and new scientific paradigms required to end an era of ‘disease infamy’ in this rapidly expanding global food industry.

By 2015 we reached a point where at least half of all the seafood consumed globally (~160 million metric tonnes, Mmt) was grown in farms rather than taken from the wild. This 80 Mmt of farmed seafood comprised fish, shellfish, crustaceans and seaweed, with around 90% produced in Asia. By 2050, global production from aquaculture is set to at least double with well-managed fisheries expected to flatline or even decline over the same period (Fig.1). Clearly, aquaculture will be making an increasingly important contribution as a source of protein to the future global diet.

The problem with aquaculture: Disease

Forty years since the landmark FAO Technical Conference on Aquaculture, the implicit forecast for aquaculture to rival fisheries production has been fulfilled. The Bangkok Declaration which followed recommended several key requirements for development beyond 2000; in particular, that animal health be managed by action at national, regional and inter-regional levels as “an urgent requirement for sustaining growth”. Although significant progress has been made in identification, diagnosis, treatment and zone management of disease in certain sectors (e.g. the European Atlantic salmon industry), resistant issues (e.g. sea lice infestation) have remained significant barriers to expansion. In other aquaculture sectors, infectious microbial diseases continue to impose major yield-limiting effects on production with the overall global impact of these diseases exceeding $6bn per annum, rivalling in impact projected proportional losses experienced in terrestrial livestock sector due to diseases such as Foot and Mouth. In specific sectors (such as shrimp), disease losses may exceed 40% of global capacity with emergent diseases (such as Early Mortality Syndrome) threatening to collapsing production in nations across Asia. Such concerns confirm disease as the major constricting factor for expansion of the aquaculture industry to 2050, and potentially cost the sector $6 billion in yield loss each year.

The present: An era of ‘disease infamy’

Even more so than terrestrial systems, aquatic environments impose a constant risk of exposure to disease-causing pathogens. A historic poor knowledge of background microbial ‘diversity’ in aquatic farm systems leads to frequent emergence of previously unknown diseases, surprising farmers and creating shock in the wider value chain. Some of these issues remain restricted to certain regions or, go away relatively quickly. Others have potential for rapid spread to distant regions with trade and, impose long term (often over decades) economic and social effects, often in some of the world’s poorest farming communities (Fig. 2).

To break the cycle of emergence, spread, persistence and effect, new thinking is needed. Participants at our workshop considered:

These questions are tackled in our recent paper - available here. 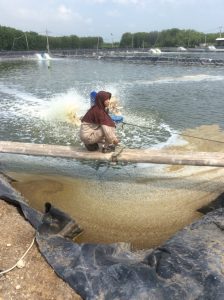 Marginal improvements which reduce the global burden of disease in aquaculture will convert to direct benefits for yield, profit, poverty alleviation and food security for producer nations. More significant interventions, including those which capitalise on automated detection of disease and even remote sensing applications have potential to mitigate against the most important yield-limiting production diseases and, to improve the insurability of the global aquaculture sector, promoting inward investment and assuring production targets to 2050 are met in a sustainable manner.